In 1998 I had the pleasure of travelling to Minnesota with members of the 5/8 Kings Regiment, 4 QLR, and a few from my very own V (the Liverpool Scottish) Company, to train with the Ohio National Guard in Camp Ripley Minnesota. It was part of an exchange programme, where an equal number of their boys came over to the UK (and probably wondered why soldiers were treated like dogs). While there, we had a day’s R&R, where we went to the Mall of America, a big ass place full of shops, restaurants and a cinema. Private Ryan had just come out, and so the myself and the other three jocks went to watch that. After coming out shell-shocked (spectacular film), we went shopping, where I spotted the jersey below; the jersey of the Mighty Ducks of Anaheim. 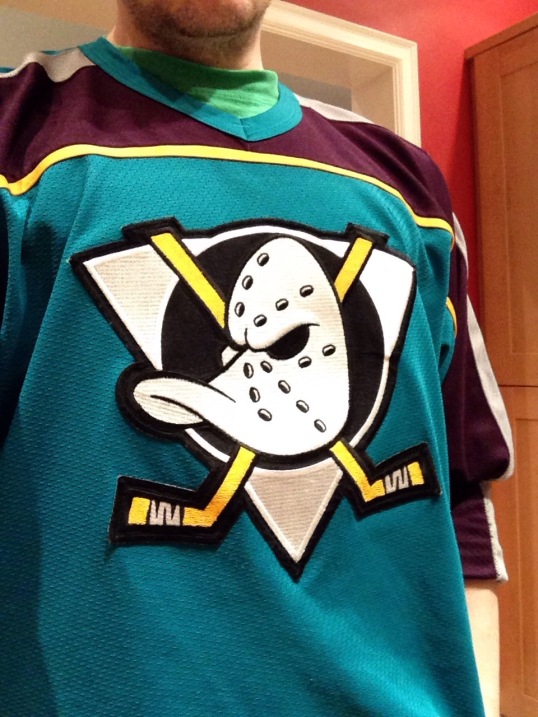 This started my life-long (so far at least) love of ice hockey, and I’ve followed the Ducks ever since. Obviously, being UK based, I suffer with the matches being on at times I’m not awake, so I tend to watch the weeks highlights/matches on Gamecentre at the weekend. It’s a magnificent sport where, rather than pretending to be hurt and rolling round the floor, the players get back up and crack on, sometimes despite serious injury – take Gregory Campbell who broke his diving in the way of a slap shot leg last year. Despite breaking a bone, he still continued to play until the end of the penalty. Hardcore. (story here). The game itself is fast, and furious, and it was one of the reasons I wrote A Game of Two Halves last year.

Midway through October last year, my work place (bless em) sent an email round advertising games from a local ice hockey team, Widnes Wild (website here), something I didn’t even know existed. In my years of work during the week and TA most weekends I went through life coming across very little I wouldn’t come across in my normal day to day life. I went to one of the matches, loved it, then went on to discover at the rink they do ice hockey lessons. So, I got in touch. Despite me never stepping foot on the ice (okay, that’s a lie, I skated once when I was about 8, and my dad kept pushing me over, much to our amusement. I also fell over on a vast patch of ice next to the Asda in Hunts Cross on the wasteland that became Focus DIY about 20 years ago) they said I could come along, and I spent an hour struggling to stand up, and cursing lots.

Perseverance is the better part of valour.

Despite being totally wank at skating, I decided that I loved every second of it, and booked onto skating lessons. I also started looking at different training routines that I could follow, which would benefit my skating, as it seemed that every muscle I had never used was now needed. Having a search about, I found this. Despite training over the six months prior to starting this, it brought me new levels of aching, and as time has passed, it still does. it’s a superb routine. At the moment, I’m continuing to do part 1 of the Gladiator training, because I’m by no means a big fella, and need the extra (healthy) poundage that the routine is adding.

Since starting to skate, I’m pleased with the progress I’ve made (currently finishing off grade 4 of skate excellence), and hopefully I’ll continue to make. The best thing for me though, is the armour for hockey practice which I wore for the first time last week (not just the helmet and gloves. Falling on ice has never been so comfortable, and now, fully padded, falling over is like falling on my bed. Padding ftw.

Not only the hockey is gripping me though; after Christmas I picked up a pair of figure skates too, something I’m wearing a lot, as I can transfer what I learn on them onto my hockeys with a reasonable amount of success. It’s a lot more graceful than hockey skating (when done properly, my drunk waterboatman skating is something else entirely) and takes a lot of skill, but at the end of the day, it can only make my hockey skating better, and give me one less thing to think about as I concentrate on keeping the puck where it’s meant to be. 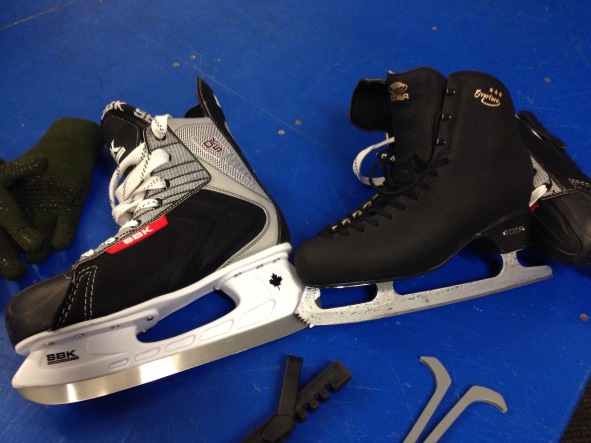 All in all, I’m loving skating, and I’m loving ice hockey. I’m pretty certain, that at some point, I’ll managed to fit some sort of hockey variant into a novel. Until then though;

View all posts by Rob Knipe